Difference between revisions of "Interactive Communication"

The studies in the Interactive Communication deal primarily with learning environments where there are two interacting, communicating agents, one of which is the student. The other agent is typically a second student, a human tutor or a tutoring system. They communicate, either in a natural language or a formal language, such as mathematical expression or menus. We are trying to find out why such instructional, dyadic, interactive communication is sometimes highly effective and sometimes less effective. Sometimes we study highly constrained forms of communication in order to vary isolated aspects, and sometimes we compare whole forms of communciation. Our hypothesis is simply that interactive communication is effective if it guides students to attend to the right knowledge components. 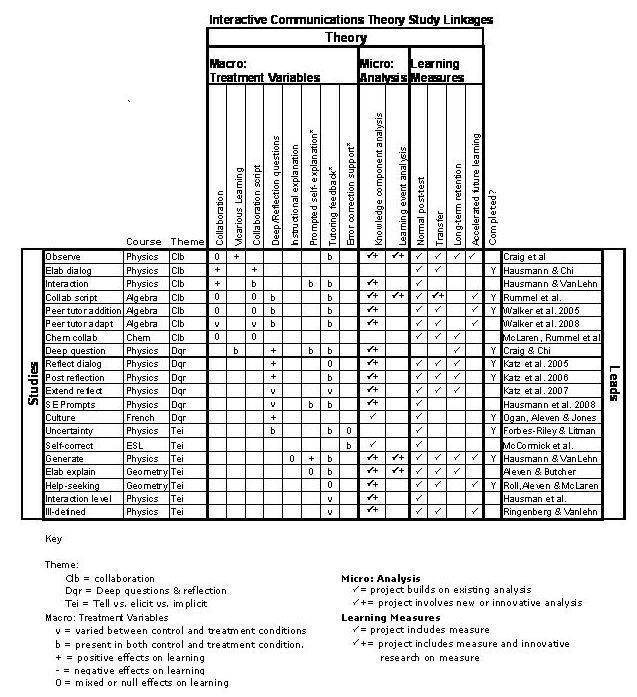 Although instructional dialogue has been studied in classrooms (e.g., Lave & Wenger, 1991; Leinhardt, 1990) and workplaces (e.g., Hutchins, 1995; Nunes, Schliemann & Carraher, 1993), we are focusing on more tractable albeit still complex situations: dyadic instructional dialogues, namely dialogues between: (a) a human tutor and a human student, (b) two human students, or (c) A computer tutor and a human student. Moreover, the dialogue are task-oriented (Grosz & Sidner, 1986) in that the participants are working together on a task rather than simply conversing with no shared goals or with opposing goals.

The independent variables (also called Treatment Variables) of the IC cluster appear as column headers in the matrix above. They are listed here with links to their glossary entries.

Measures of normal and robust learning.

If we view a short episode of interactive communication as a learning event space, there could be three reasons why one treatment might be more effective than another:

(3) If the learning event spaces are the same and the students take the same paths, they still might learn more in one condition than another because of the way that they traversed the path. For instance, having a partner observe the student as the student traverse a path might cause the student to be more attentive to details and to remember more. That is, the path effects might differ in the treatment vs. the control.

When and how does collaboration between peers can increase robust learning? Problem solving, example studying and many other activities can be done alone, in pairs, or in pairs with various kinds of assistance, such as collaboration scripts. From the standpoint of an individual learner, having a partner offers more assistance than working alone, and having a partner plus other scaffolding offer even more assistance. Thus, the Assistance Hypothesis predicts an interaction between various forms of peer collaboration and students' prior competence.

When and how can asking the student questions increase the student's robust learning? What kinds of questions are best?