The Effects of Interaction on Robust Learning

It is widely assumed that an interactive learning resource is more effective in producing learning gains than non-interactive sources. It turns out, however, that this assumption may not be completely accurate. For instance, research on human tutoring suggests that human tutoring (i.e., interactive) is just as effective as reading a textbook (i.e., non-interactive) under very particular circumstances (VanLehn et al., 2007). This raises the question, under which conditions should we expect to observe strong learning gains from interactive learning situations?

Several studies on collaborative learning have shown that it is more effective in producing learning gains than learning the same material alone. This finding has been replicated in many different configurations of students and across several different domains. Once the effect was established, the field moved into a more interesting phase, which was to accurately describe the interactions themselves and their impact on student learning (Dillenbourg, 1999). One of the hot topics in collaborative research is on the "co-construction" of new knowledge. Co-construction has been defined in many different ways. Therefore, the present study limits the scope of co-constructed ideas to jointly constructed explanations.

How is robust learning affected by self-explanation vs. jointly constructed explanations?

Only one independent variable, with two levels, was used:

Prompting for an explanation was intended to increase the probability that the individual or dyad will traverse a useful learning-event path.

Figure 1. An example from the Individual Self-explanation condition

Figure 2. An example from the Joint Self-explanation condition 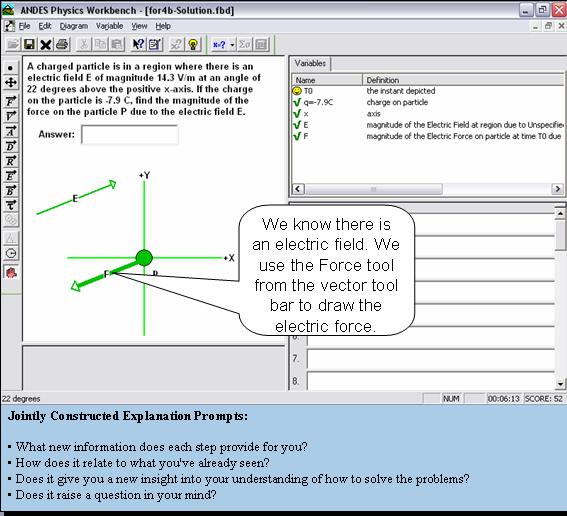 The Interactive Hypothesis: collaborative peers will learn more than the individual learners because they benefit from the process of negotiating meaning with a peer, of appropriating part of the peers’ perspective, of building and maintaining common ground, and of articulating their knowledge and clarifying it when the peer misunderstands. In terms of the Interactive Communication cluster, the hypothesis states that, even when controlling for the amount of knowledge components covered, the dyads will learn more than the individuals.

Laboratory Experiment We conducted a laboratory (in vitro not in vivo) experiment during the Spring 2007 semester. Undergraduate volunteers, who were enrolled in the second semester of physics at the University of Pittsburgh, composed the sample for the study. Unfortunately, the sample size was small because our pool of participants was extremely limited.

Procedure Participants were randomly assigned to condition. The first activity was to train the participants in their respective explanation activities. They read the instructions to the experiment, presented on a webpage, followed by the prompts used after each step of the example. Finally, they read an example of a hypothetical self-explanation or joint explanation.

After reading the experimental instructions, they then watched an introductory video to the Andes physics tutor. Afterwards, they solved a simple, single-principle electrodynamics problem (i.e., the warm-up problem). Once they finished, participants then watched a video solving an isomorphic problem. Note that this procedure is slightly different from those used in the past where examples are presented before solving problems (e.g., Sweller & Cooper, 1985; Exper. 2). The videos decomposed into steps, and students were prompted to explain each step. The cycle of explaining examples and solving problems repeated until either 4 problems were solved or 2 hours elapsed. The first problem was used as a warm-up exercise, and the problems became progressively more complex.

The results from the laboratory study were as follows:

The pattern observed at the level of conditions replicated at the level of problem. That is, when the problem was used as a within factor in a repeated measures analysis of variance (MANOVA), the JCE condition demonstrated lower normalized assistance scores for all of the problems, except for the first, warm-up problem (see Table).

In addition to providing higher quality solutions, the jointly constructed explanation condition (M = 985.71, SD = 45.60) also solved their problems more quickly than the individually constructed explanation condition (M = 1097.75, SD = 51.45). Although the omnibus difference between experimental conditions was not statistically reliable, F(1, 23) = 2.66, p = .12, ηp2 = .10, the differences in solution times for the second and third problem were reliably lower for the JCE condition. This finding is particularly interesting because the experiment was capped at two hours; therefore, the dyads were able to complete the problem set more often than the individuals, χ2 = 4.81, p = .03. There were no reliable differences in terms of the amount of time explaining the steps of the worked-out examples.

Because not all of the individuals were able to complete the entire problem set, their data could not be included in an analysis of the knowledge components. A MANOVA assumes that each individual participates in all of the measures. However, this is not the case when the individuals did not complete the last problem. Therefore, this fine-grained analysis of learning will need to wait until the study can be replicated in the classroom, with a larger sample size.

In an effort to anticipate the replication, we used a data imputation method for estimating missing values for each student (SPSS v14.0: Transform/Replace missing values/Median of nearby points). This provided a complete dataset for all participants. The results are summarized in the table below.

This study is part of the Interactive Communication cluster, and it hypothesizes that the prompting singletons and dyads should increase the probability that they traverse useful learning events. However, it is unclear if the act of communicating with a partner should increase learning, if the type of statements (i.e., explanations) are held constant. A strong-sense version of the Interactive Communication hypothesis would suggest that interacting with a peer is beneficial for learning because dyads can learn from their partner by assimilating knowledge components articulated by the partner or via corrective comments that help to refine vague or incorrect knowledge components.

Both self-explanation and joint-explanation should lead to deeper Knowledge Construction Dialogues or monolgues because they are likely to include integrative statements that connect information with prior knowledge, connect information with or previously stated material, or infer new knowledge. However, it may be more likely that deeper knowledge construction occurs during dialogue because the communicative partner provides a social cue to avoid glossing over the material.