To assess the effectiveness of the script, we conducted two classroom studies. In an initial, small scale study (pre study) that served to establish basic effects and to test the procedure in a classroom setting, we compared scripted collaboration with an unscripted collaboration condition in which students collaborated without support. In the full study, we furthermore compared these collaborative conditions to an individual condition to assess the effect of the collaborative Tutor extension to regular Tutor use. The experimental learning phase took place on two days of instruction. On the third day, during the test phase, students completed several post tests that assessed robust learning. Results from the transfer test of the pre study revealed significant differences between conditions: Students that received script support during collaboration showed higher mathematical understanding and were better at reasoning about mathematical concepts. In the full study, results varied for the different measures of robust learning: While students of the scripted condition had a slight disadvantage when the script was removed for the first time (collaborative retention; note: only for students in the scripted condition, the problem-solving situation was different than during instruction), this disadvantage could no longer be found in the second retention test (individual retention). The transfer test revealed that students that learned collaboratively were better at reasoning about mathematical concepts. Finally, students of the scripted condition were better prepared for future learning situations than students that collaborated without script support.

In our project, we combined two different instructional methods both of which have been shown to improve students’ learning in mathematics: Learning with intelligent tutoring systems (Koedinger, Anderson, Hadley, & Mark, 1997) and collaborative problem solving (Berg, 1993). The Cognitive Tutor Algebra that was used in our study is a tutor for mathematics instruction at the high school level. Students learn with the Tutor during part of the regular classroom sessions. The Tutor's main features are immediate error feedback, the possibility to ask for a hint when encountering impasses, and knowledge tracing, i.e. the Tutor creates and updates a model of the student’s knowledge and selects new problems tailored to the student’s knowledge level. Although several studies have proven its effectiveness, students do not always benefit from learning with the Tutor. First, because the Tutor places emphasis on learning procedural problem solving skills, yet a deep understanding of underlying mathematical concepts is not necessarily achieved (Anderson, Corbett, Koedinger, & Pelletier, 1995). Second, students do not always make good use of the learning opportunities provided by the Cognitive Tutor (e.g. help abuse, see Aleven, McLaren, Roll, & Koedinger, 2004; gaming the system, Baker, Corbett, & Koedinger, 2004). So far, the Cognitive Tutor has been used in an individual learning setting only. However, as research on collaborative learning has shown, collaboration can yield elaboration of learning content (Teasley, 1995), thus this could be a promising approach to reduce the Tutor’s shortcomings. On the other hand, students are not always able to effectively meet the challenges of a collaborative setting (Rummel & Spada, 2005). Collaboration scripts have proven effective in helping people meet the challenges encountered when learning or working collaboratively (Kollar, Fischer, & Hesse, in press). To ensure that students would profit from a collaboratively enhanced Tutor environment, we thus developed a collaboration script that prompts fruitful interaction on the Tutor while students learned to solve “systems of equations”, a content novel to the participating students. The script served two goals: First, to improve students’ robust learning of knowledge components relevant for the systems of equation units (i.e. both problem solving skills and understanding of the concepts). Second, students should increase their explicit knowledge of what constitutes a fruitful collaboration and improve their collaboration skills in subsequent interactions without further script support. This is particularly important due to the risk of overscripting collaboration that has been discussed in conjunction with scripting for longer periods of time (Rummel & Spada, 2005).

Does the script approach improve students’ collaboration, and does this result in more robust learning of the algebra content?

The independent variable was the mode of instruction. Three conditions were implemented in the learning phase that took place on two days of instruction:

Figure 2 and 3. Screenshot of the enhanced Cognitive Tutor Algebra: Instructions for the following sub step (for details, see figure 3; responsibilities for student A and B marked by color of text. 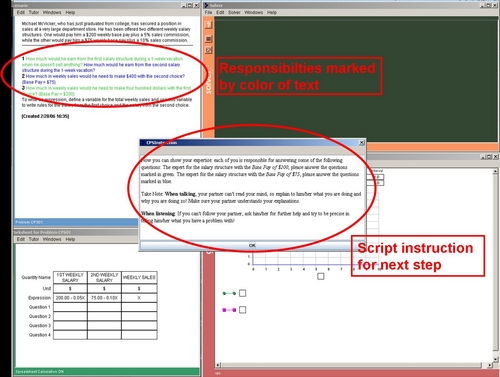 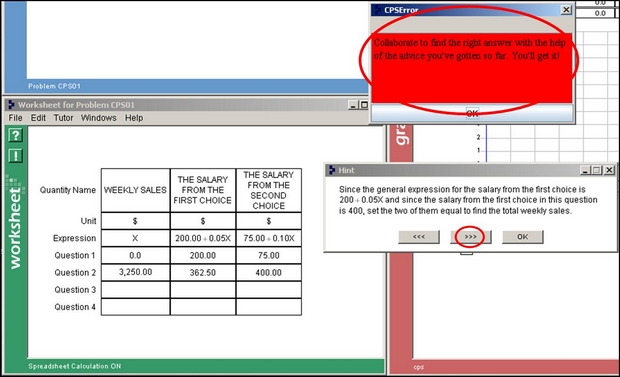 In all conditions, the Cognitive Tutor supported students’ problem solving by flagging their errors and by providing on-demand hints.

In the pre study that aimed at establishing basic effects and at testing the procedure in a classroom setting, we only compared unscripted and scripted collaborative problem solving.

The hypothesis can be stated in two parts: knowledge gains in the domain of algebra and improvement of the dyads’ collaboration skills:

Several variables from these post tests are compared to test the two hypotheses.

The study procedure took place during 3 classroom periods over the course of a week. During day 1 and day 2 (the learning phase), the experimental conditions (i.e. the independent variables) were implemented. On day 3, students had to solve several post-tests that assessed different aspects of robust learning.

The study was conducted at a vocational high school: Half a day, students took vocational classes (e.g. carpentry, cooking) and mathematics at the vocational school, half a day, they took the regular lessons at their home schools. This yielded a high rate of students’ absenteeism, and as a consequence, we had to exclude some dyads from further data analysis. We restricted the analysis to students that met the following criteria: they were present at least during one day of instruction, they were present at the test day, and they always worked according to their condition when present. For instance, a student from one of the collaborative conditions that worked individually on one day was excluded from further data analysis. The resulting participant numbers for data analysis in the two studies are reported in the respective findings sections.

In the pre study, nine students from the unscripted and ten students from the scripted condition met the criteria to be included in the data analysis. Since the subject number in the collaborative post tests is rather small, we’ll concentrate on the results of the paper and pencil post test (far transfer) that was solved individually. This test revealed substantial differences between conditions.

Significant differences were found both in the MANOVA (Pillai-Spur, F(4, 14) = 7.35, p < .05) and in subsequent ANOVAs. Multiple choice answers on basic concepts did not show a significant difference, F(1,17) = 2.26, ns. However, the scripted condition outperformed the unscripted condition on the discrete answer questions about the system’s concept, F(1,17) = 22.16, p < .01. A significant difference between conditions was also found for the open format questions of both problem sets with F(1,17) = 5.85, p < .05 for the basic concepts and F(1,17) = 17.01, p < .01 for the system’s concept. Particularly the results of the open format questions demonstrate the script’s effect on conceptual knowledge acquisition: after scripted interaction during the learning phase, students were better at articulating their mathematical thinking compared to their unscripted counterparts. However, it should be noted that in general students in both conditions had difficulties providing explanations, thus only reached low scores in the open format questions. The amount of wrong explanations and the number of students who did not even try to articulate their thinking was very high.

Due to technical difficulties during the test day, subject number in single post tests was further reduced: Server problems in one of the classrooms yielded significant differences between conditions in the amount of time to complete the post tests. To reduce these differences, we excluded students that had less than 10 minutes to solve the Cognitive Tutor post test (originally, 15 minutes were allocated to solve these tests). In the paper and pencil post test, we only included student data until the last question that was answered. Subsequent questions were counted as missing values. Since only few students were able to solve the last problem set, it is not reported in data analysis.

Since students’ prior knowledge, assessed as their grade in mathematics, had a positive influence on all learning outcome measures, it was included as covariate in data analysis. When results indicated an interaction between prior knowledge and condition (aptitude treatment interaction), we included the interaction term in the statistical model.

Table 2. Means of the Robust Learning Measures
Note: for error rate, assistance score, and the variables of the transfer test, means are adjusted for differences in prior knowledge

This study is part of the Interactive Communication cluster, and its hypothesis is a specialization of the IC cluster’s central hypothesis. According to the IC cluster’s hypothesis, there are three possible reasons why an interactive treatment might be better. First, it might add new paths to the learning event space (e.g. the learning partner offers knowledge the other person lacks). Second, it might improve students’path choice. And third, students might traverse the paths differently, e.g. by being more attentive, yielding to increased path effects.

These three mechanisms can also be found in this study:

As this study, Walker A Peer Tutoring Addition adds scripted collaborative problem solving to the Cognitive Tutor Algebra. The studies differ in the way collaboration is integrated in the Tutor. First, in this study, both students first prepare one subtasks of a problem to mutually solve the complex story problem later on. Thus, although the students are experts for different parts of the problem, they have a comparable knowledge level during collaboration. In contrast, in Walker et al.'s study, one student prepares to teach his partner. Then, they change roles. Thus, during collaboration, their knowledge level differs. Second, in this study, collaboration was face to face, whereas the Walker et al. study used a chat tool for interaction.

Similar to the adaptive script component of the Collaborative Problem-Solving Script, the Help Tutor project aims at improving students' help-seeking behavior and at reducing students' tendency to game the system.
Furthermore, both studies contain instructions to teach metacognition. The metacognitive component in our study instructs students to monitor their interaction in order to improve it in subsequent collaborations; the Help Tutor project asks students to evaluate their need for help in order to improve their help-seeking behavior when learning on the Tutor.

Furthermore, both our study and the Help Lite (Aleven, Roll) aim at improving conceptual knowledge.