Is visual-verbal integration a major source of difficulty for students learning geometry? Further, how can coordinative learning with visual and verbal knowledge components in geometry be supported by instructional events that vary the support for and type of sense making in which learners engage during problem solving? In geometry, students may have difficulty integrating visual and verbal information sources for two reasons: first, they may lack deep understanding of geometry concepts (e.g., what is an interior angle?) that are relevant to problem-solving principles (e.g., the interior angles theorem for circles); second, students may be unable to coordinate visual problem features with verbal principles during problem solving. Our research explores the robust learning effects associated with visual-verbal training of geometry features and varied levels of instructional assistance in coordinating visual diagram features with verbal geometry principles during problem solving.

Research with both experts and more novice learners has shown that integrated visual-verbal knowledge supports successful problem solving. In geometry, for example, experts use key diagram configurations to cue retrieval of relevant schemas, and these visual configurations help successfully model expert proof (Koedinger & Anderson, 1990). In mathematics, experts are more likely than novices to generate diagrams and to use these visual representations to guide their reasoning about problem-solving steps (Stylianou, 2002).

Even for more novice learners, learning benefits are seen when visual and verbal information is processed jointly instead of in isolation. In geometry, superficial visual similarities between geometry diagrams can decrease a novice’s likelihood of problem-solving success because novices focus on irrelevant visual similarities at the expense of conceptual problem differences (Lovett & Anderson, 1994). Even when visualizations depict helpful (rather than misleading) information for learning, verbal explanations support deeper understanding. For example, the value of graphical feedback when using a physics simulation is greatly enhanced by the presence of short, embedded verbal explanations that focus learners on key principles (Rieber, Tzeng, & Tribble, 2004). Similarly, learners suffer when verbal information is processed alone. Visual representations that are designed to be informationally-equivalent to a given piece of text or audio nevertheless support deeper understanding of the text (Ainsworth & Loizou, 2003; Butcher, 2006) or audio explanations (e.g., Moreno & Mayer, 2002). Further, students benefit from activities that coordinate both visual and verbal sources; these activities include verbal comparison of self-generated and ideal diagrams (Van Meter, 2001; Van Meter, Aleksic, Schwartz, & Garner, 2006) as well as dragging and dropping verbal information into a diagram to create an integrated representation (Bodemer, Ploetzner, Feuerlein, & Spada, 2004).

The potential importance of connecting visual and verbal information also is supported by the literature on knowledge transfer following example learning, where the use of abstract rules can combat problems associated with focus on superficial similarity. Although examples often support problem solving, students frequently are unable to successfully solve transfer problems that are not superficially very similar to the trained examples (for a review, see Reeves & Weissberg, 1994). Research in reasoning and transfer has found that student performance is better supported by examples that include instruction on abstract rules when compared to learning with examples alone or instruction alone (Fong, Krantz, & Nisbett, 1986; Fong & Nisbett, 1991). Thus, we should expect that when students connect geometry diagrams (examples) to relevant geometry principles (abstract rules), robust learning will be supported.

Study 1: Does coordinated visual-verbal training on geometry concepts prior to problem solving support learning? This in vivo student extends our understanding of coordinative learning by addressing whether concept learning can be supported by visual-verbal coordination before problem solving practice. This study was conducted at Riverview High School, in Winter 2007-2008 (testing ended in January 2008). In a two condition study, we varied the type of conceptual training that students receive before beginning problem solving activities. 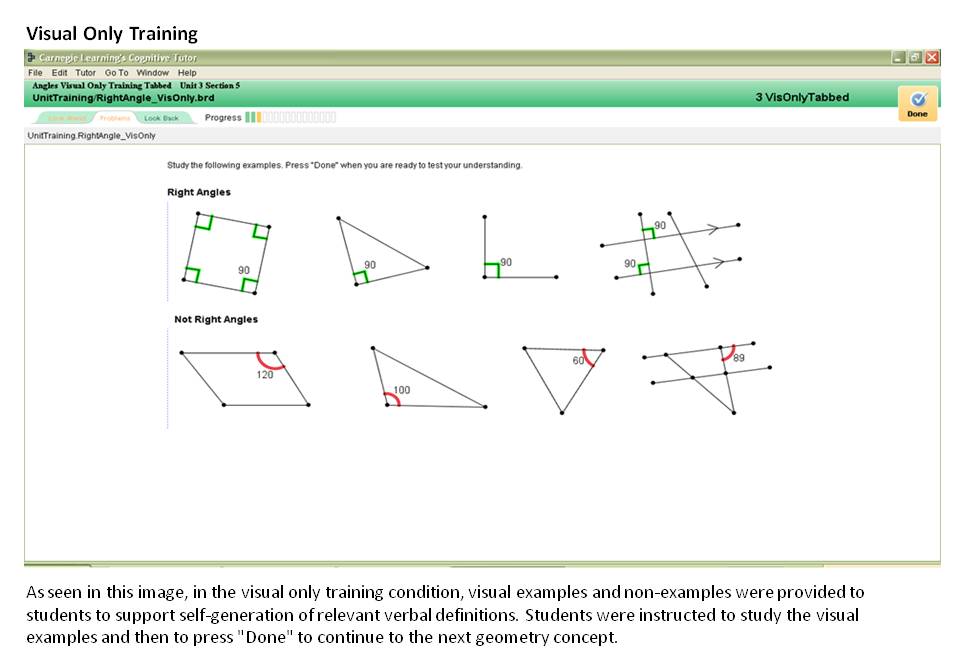 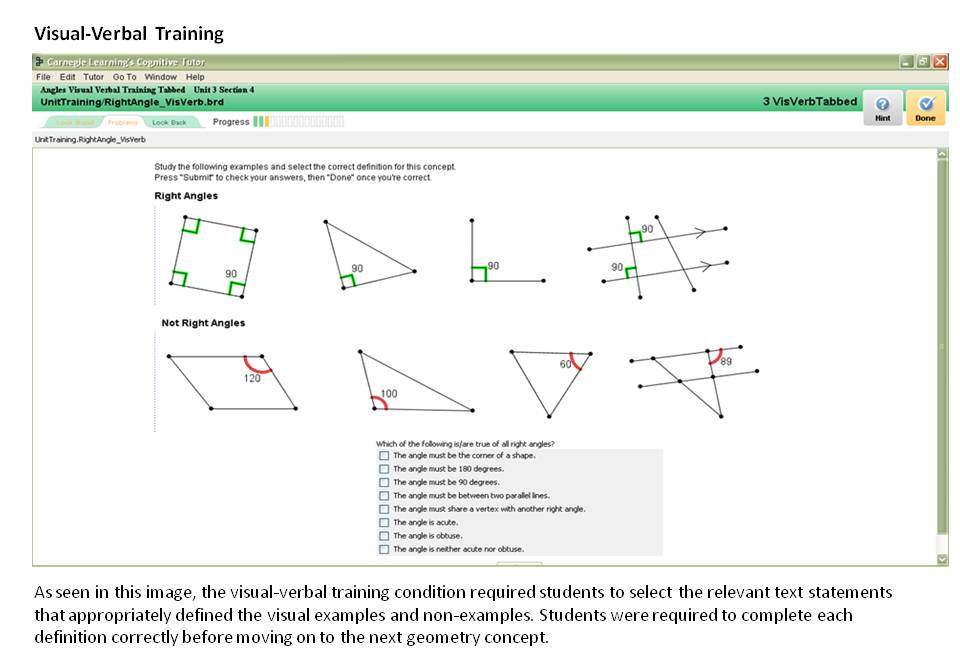 Study 2: How does coordination of visual and verbal information sources support visual feature understanding and application? This in vivo study extends our understanding of coordinative learning by addressing whether visual-verbal coordination maximizes robust learning when coordination is tied to student errors during problem solving. This study was conducted at CWCTC, beginning in late January 2008. The study curriculum was the Angles units of the Geometry Cognitive Tutor. In a 3 condition study, we varied the coordinative learning activities following student errors in the tutor.

Study 2: Independent Variables
No Highlighting: Following an error, no highlighting in the visual diagram is provided to students. 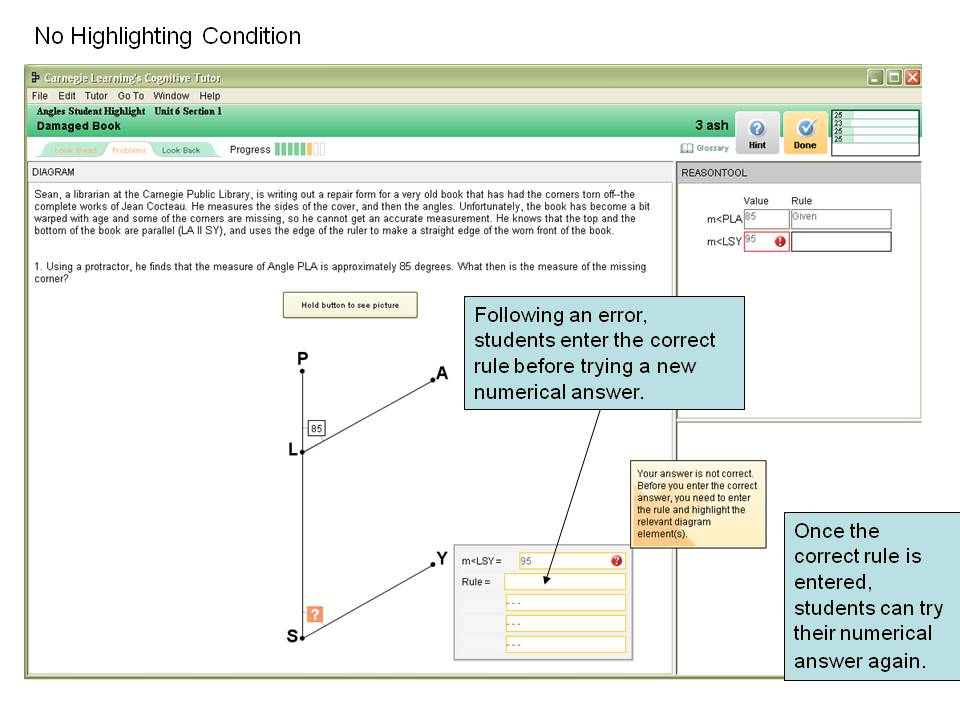 Tutor Highlighting: Following an error, the tutor highlighted the features of the problem diagram that are relevant to the selected geometry principle. 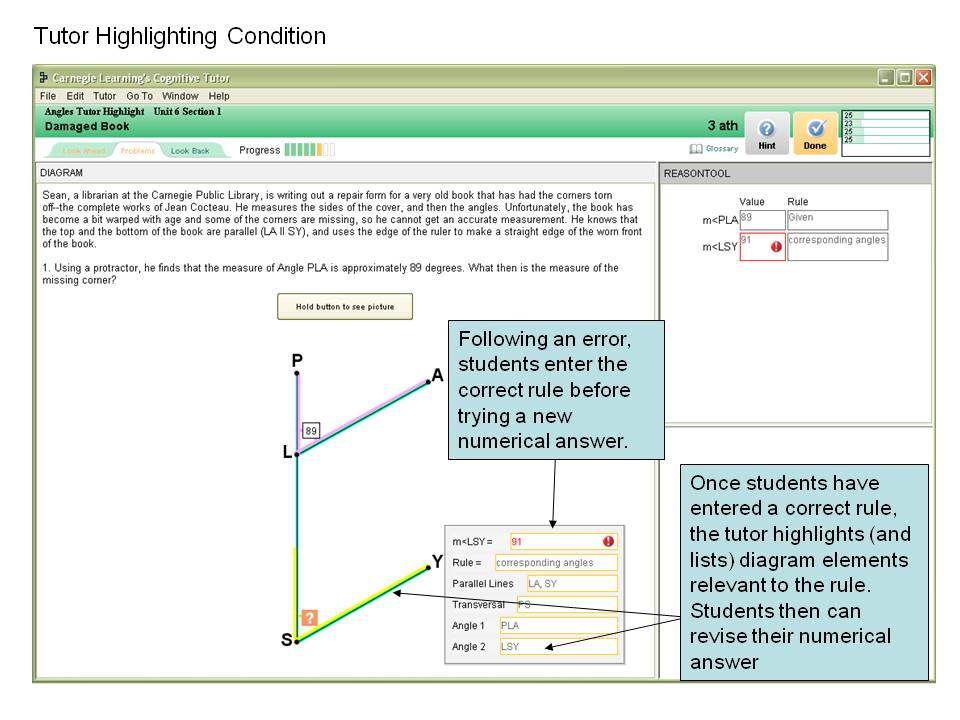 Student Highlighting: Following an error, the student is required to highlight the relevant visual information associated with geometry principles (namely, the features in the diagram to which the selected rule applies). 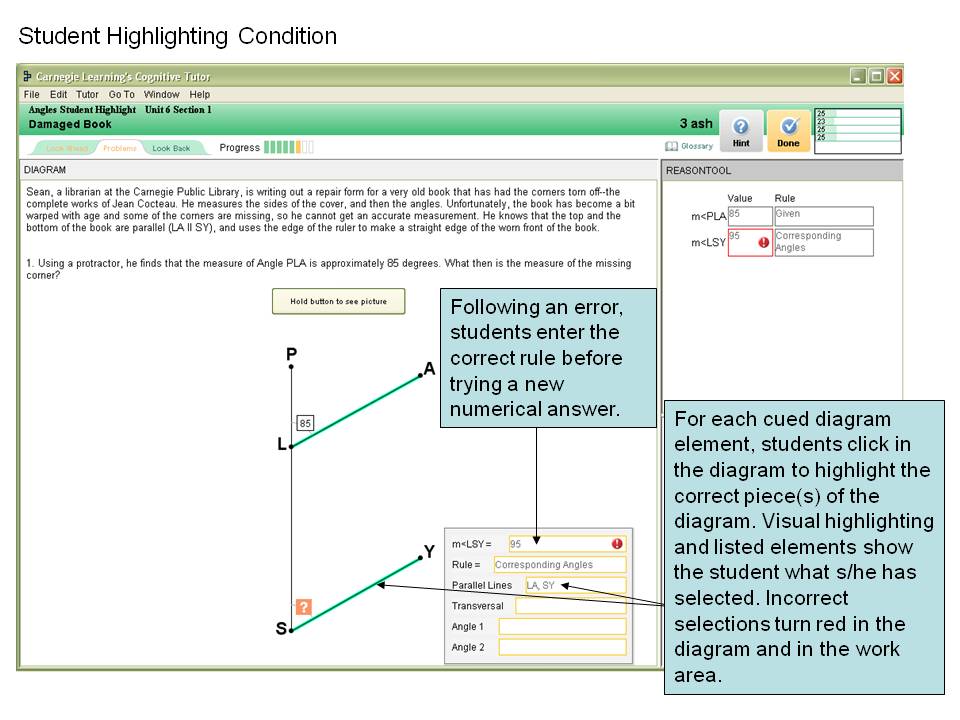 Although we hypothesized that coordinative support in linking verbal definitions of geometry concepts to visual examples would support the development of robust knowledge, visual only training was found to be as effective as coordinated visual-verbal training in this study. During early use of the tutor (as seen in the Concept Quiz 1 and Unit 1 Problem Solving results), the pattern of results showed an advantage for students trained in the visual-only condition. However, by posttest (see Overall True/False in the graph), students performed similarly on knowledge assessments. 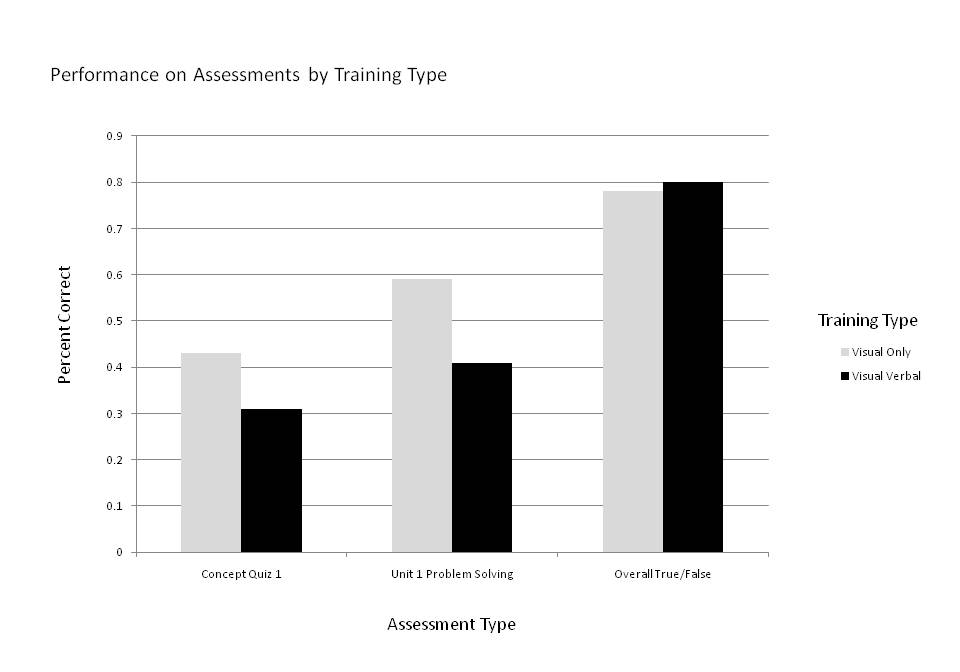 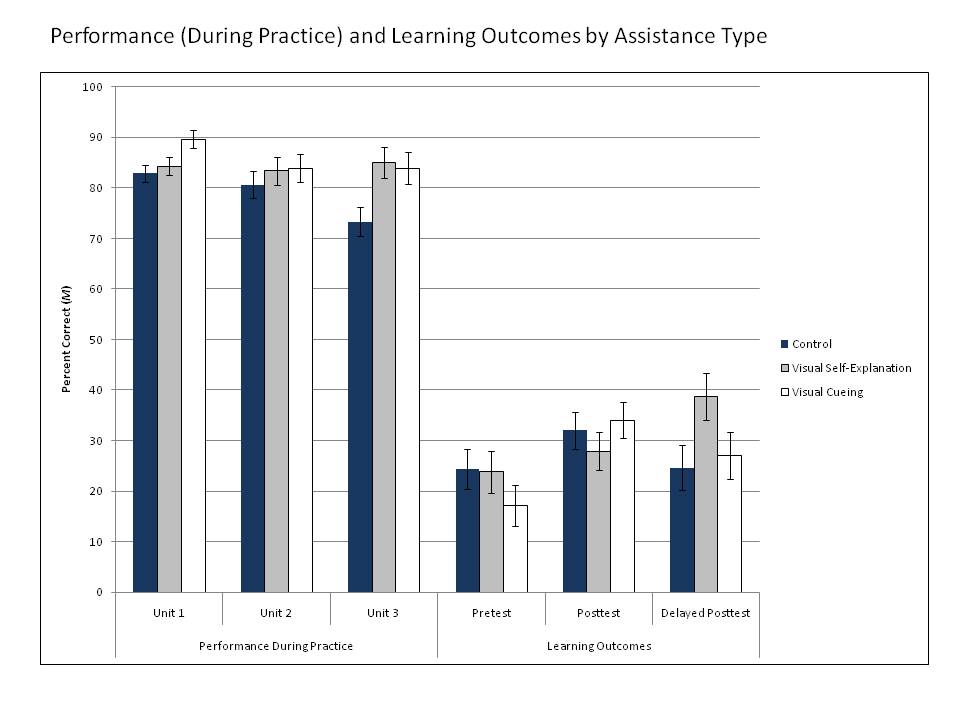 From a Coordinative Learning Cluster perspective, coordination between visual and verbal information supports foundational skill building, because attending to both representations simultaneously associates features from both with the learned knowledge components. This association increases feature validity and promotes robust learning.