Does integration of visual and verbal knowledge during learning support deep understanding? Can interactive communication using visual and verbal knowledge components support the development of integrated representations? In our research, we are exploring how student explanations in an intelligent tutoring environment that includes visual (pictorial) and verbal (textual) information can support robust learning. In domains like Geometry, where visual (diagram) and verbal (textual and conceptual) information is critical to deep understanding and successful problem solving, focusing student communication acts on conceptual relationships between critical knowledge components should support deep understanding. Thus, our research is investigating explanations that link the diagram features (visual knowledge components) and geometry rules (verbal knowledge components) related to successful problem-solving steps. We call these visual-verbal explanations "Elaborated Explanations." In our studies, students give a verbally-focused explanation (by stating a relevant geometry rule) as well as a visually-focused explanation (by stating the diagram features that used to apply the stated rule). The intelligent tutor provides feedback and hints on these elaborated, verbal-visual explanations. We hypothesize that this type of interactive communication will support integration of visual and verbal knowledge during learning, leading to better transfer and long-term retention.

A rich body of prior research has demonstrated that students develop deeper understanding of instructional materials when they self-explain to themselves during learning (e.g., Bielaczyc, Pirolli, & Brown, 1995; Chi, Bassok, Lewis, Reimann, & Glaser, 1989; Chi, de Leeuw, Chiu, & LaVancher, 1994). Although much of this research has focused on students self-generated and natural language explanations, research has also shown benefits of simple, menu-based explanations in supporting learning. An existing version of the Geometry Cognitive Tutor implements student self-explanations in this simple manner. After correctly answering a geometry problem step, students must select the geometry rule or theorem that justifies their answer from a glossary menu of terms.

Despite the limitations of simple, menu-based explanations, they have been shown to promote student learning in the Geometry Cognitive Tutor (Aleven & Koedinger, 2002). However, these menu-based explanations may not be supporting the development of deep, expert-like connections between conceptual geometry principles and visual features of geometry problem diagrams. Students complete these explanations after they have successfully solved a numerical problem-solving step. There there is no requirement that students make explicit connections between the rule being applied and the visual features that are required for application. Because prior work has shown that experts' geometry problem solving is driven by recognition of key diagram features that cue relevant conceptual knowledge (Koedinger & Anderson, 1990), supporting deep student understanding in geometry may require that students explicitly connect relevant conceptual knowledge to visual diagram features.

Our approach is to support students' connections between and integration of visual and verbal knowledge components through interactive communication, where students' explanations of their problem solving steps reference both verbal, conceptual knowledge (in the form of a relevant geometry rule) and its relationship to key diagram features. Thus, our question is whether explicit forms of communication that link verbal and visual knowledge components can be more successful at promoting robust learning than communication that requires expression of verbal, declarative knowledge only. 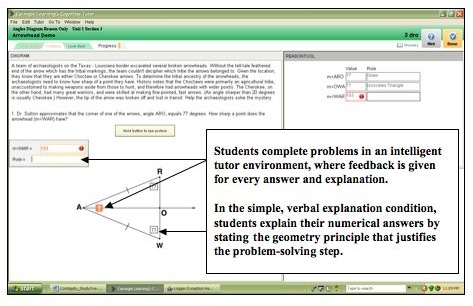 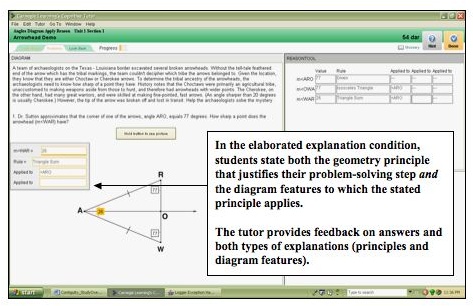 We have evidence from the (paper-based) difficulty factors analysis that elaborated explanations support problem solving performance. We hypothesize that the classroom test of elaborated explanations will show support for robust learning. That is, we anticipate that the classroom test will show not only support for long-term retention but also transfer of geometry knowledge.

From an Interactive Communication Cluster perspective, the Elaborated Explanations help students focus on the right content for problem solving. Students will be less likely to engage in shallow strategies or to focus on irrelevant features in problem solving when tutored to make these explanations. Further, by relating these critical knowledge components via an explicit, communicative act, students also should integrate these knowledge components into a rich knowledge representation.

From a broader PSLC perspective, elaborated explanations support coordination through self-explanation of visual and verbal information. Communication that makes use of multiple representations during learning likely affects path choice. For example, when students are required to explain the application of geometry principles using diagrams, there will be only small differences in estimated effort of shallow and deep strategies since shallow strategies are unlikely to achieve the correct answer. Further, we anticipate that elaborated explanations also produce path effects: the processes that students employ via path choice are more effective when the materials support use of visual and verbal information during sense making. Specifically, scaffolds or materials that support sense making with visual and verbal information should promote integration.

Implicit Support for Visual-Verbal Knowledge Integration:
Our research is investigating multiple methods with which student learning can be supported by interactions with pictorial information during geometry learning. Our work also includes more implicit methods for supporting student integration visual and verbal knowledge components. These methods include Contiguous vs. Noncontiguous Representations and Integrated Hints [Link to be added].

Specificity in Interactive Communication:
The addition of visually-related explanations may force students to be more specific in explaining how a geometry principle applies to a problem-solving step. This potential interpretation is related to the hypothesis that elaborative interaction supports learning by increasing the specificity of another person's comments. In fact, Hausmann & Chi showed that elaborative interaction improves deep learning.

Application Information in Interactive Communication:
The addition of visually-related explanations may help students by directing their attention to content that governs the application of information during problem solving. This potential interpretation is related to the hypothesis being tested by Ringenberg & VanLehn, that completely justified examples support robust learning by demonstrating the reasoning and all application steps needed for problem-solving.