There is much evidence to believe that games are fun. Can we incorporate some of the features that make games fun into intelligent tutors, in a way that improves motivation, generates positive affect, and improves the robustness of student learning? Specifically, what happens if we take game elements known to be effective such as fantasy, competition, and trivial choice, and embed into tutors already known to promote learning, using principles in PSLC theoretical framework? In the current project (which started in Year 5 of the PSLC), we are investigating the effect of adding game elements to an existing set of fractions tutors developed by Martina Rau (Rau, Aleven, & Rummel, in press) for a different PSLC project. The game elements comprise a fantasy soccer game, where success in the soccer game depends on learning progress in the factions tutors.

Games and tutors appear to have complementary strengths. The current project is an attempt to determine if we can develop learning environments that leverage the strength of each type of learning environment, creating learning software that is as motivationally effective as games but promotes robust learning as well as intelligent tutors. We investigate one particular way of integrating game elements and learning content, building a game around an intelligent tutor engine.

How best to integrate learning content and game elements has been the subject of much theorizing, with some authors arguing that optimal learning requires that the learning content and game world be mutually dependent (Lepper & Malone, 1987), and others arguing that the learning should be embedded in the game’s core mechanic (Habgood, 2007). However, such theories ignore the real-world success (at least in anecdotal reports from teachers and students) of environments that feature a much looser integration between learning and motivational embellishments (e.g., FirstInMath). Given that a loose coupling between game elements and learning activities is far easier to implement (since it avoids the difficult problem of embedding math problems in a storyline or game context, hard to do especially if the learning content is to be adapted to individual students’ learning results), it is reasonable to investigate this option first. It may well be that as long as the game features are “cool,” the degree of integration is not really a strong factor. As mentioned, the success of for example the motivational embellishments in FirstInMath certainly suggest so.

H4
Students will choose to play the tutor with game features for longer than an unmodified tutor covering the same material, given the option to choose other activities.

We are investigating the effect of loosely coupling the fractions tutors to a parallel fantasy world. This fantasy world was designed in a participatory design process involving 6th graders (the target population). The main theme (soccer) was chosen because it will appeal to the taste of both girls and boys.

In the fantasy world, a soccer game takes place on a tropical beach between a motley crew of friendly animal characters and a group of invading pirates. This unfriendly bunch is intent on taking over the beach, a disaster that can be averted only by beating the pirates at the soccer game. The student regularly switches between the tutors and the fantasy world (in a manner controlled largely by the system). During each visit to the fantasy world, the student selects a game move (e.g., a deep pass, or less risky dribble). The outcome of that move will not be known until the student’s next visit to the fantasy world, and the probability of success of that move depends on the student’s performance on the intervening fractions problems. (It may be clear that this coupling between game elements and learning is loose: different learning content could be slotted in without changing the game.) 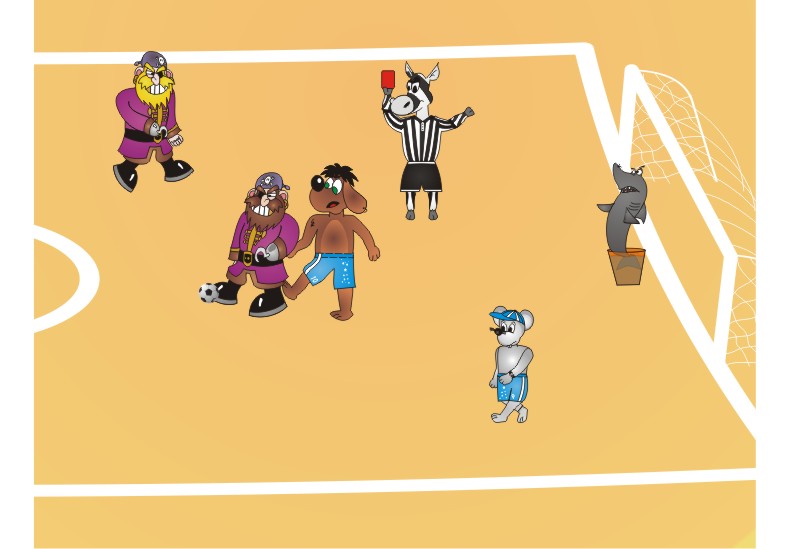 An image from the "pirate soccer" fantasy world

We will evaluate whether this game leads to increased learning, compared to a standard tutor without the game elements, and whether any improvement in learning we may observe is mediated by increased motivation and more positive affect. Affect will be assessed by means of field observations, motivation (interest, self-efficacy) by means of questionnaires. We will evaluate both whether the game leads to greater persistence (when student have the option to do something else), and whether it leads to greater learning even when the set of learning activities (but not time) is held constant (which if true would mean that the game elements lead to deeper processing during the same set of learning activities).

We will conduct two in-vivo experiments comparing the tutor with game features against the regular tutor.

The first experiment, to be conducted in LearnLab schools in Fall 2009, will control for time. Students will be randomly selected to use either the game or the unmodified tutor (for equity, all students will receive access to the game over the web after the study). Motivation and liking will be assessed by pre-test and post-test questionnaires, and affect will be assessed by quantitative field observations during usage. Robust learning will be measured by pre-test and post-test.

The second experiment, to be conducted in LearnLab schools in Spring 2010, will allow time to vary . Students will be randomly selected to use either the game or the unmodified tutor (for equity, all students will receive access to the game over the web after the study). Students will be required to use the condition for one class period, and then in two subsequent class periods will be given the choice to switch conditions or use an alternate piece of educational software covering the same material. Motivation will be assessed by students' time allocation once they are given the option of switching tasks.