The aim of this project on Training in Experimental Design (TED) is to develop a computer-based intelligent tutoring system to improve science instruction in late elementary through middle school grades. The proposed intervention focuses on the conceptual understanding and procedural skills of designing and interpreting scientific experiments. The primary support of the project has come from the Institute of Education Sciences over the past 6 years: the specific aspect of TED that is supported by the PSLC's cognitive thrust involves a professional development component, in which the TED researchers work with a teacher in the Pittsburgh Public School's new Science and Technology Academy to develop effective implementations of TED, and to create plausible comparisons between TED's method and content, and the method and content of "normal" teacher delivered instruction on experimental design. Although the long term aim of the TED project is to transform TED-1 from a non-adaptive "straight line" instructional delivery system into an intelligent adaptive tutor (TED-2), the current PSLC project involves empirical studies of comparisons between human and TED-1, delivering a non-adaptive lesson plan.

A thorough understanding of the “Control of Variables Strategy" (CVS) is essential for doing and understanding experimental science, whether it is school children studying the effect of sunlight on plant growth, or consumers attempting to assess reports of the latest drug efficacy study. As fundamental to the scientific enterprise as CVS is, it tends to be taught in a shallow manner. Typically, only its procedures are explicitly taught, while the conceptual basis for why those procedures are necessary and sufficient for causal inference is seldom addressed. Brief statements about experimental design procedures, without subsequent instruction about the rationale for such designs, appear to be the norm in science textbooks, though there are notable exceptions (e.g., Hsu, 2002). Even when students are provided with rich interactive contexts in which to design experiments (Kali, & Linn, 2008; Kali, Linn, & Roseman, 2008), the focus for any particular module is on using experimentation to advance domain knowledge, rather than on CVS per se as a domain-general acquisition.

The consequences of meager levels of CVS instruction are clear. A substantial body of research evidence shows that, absent explicit instruction, CVS is not easily learned. For example, Kuhn, Garcia-Mila, Zohar and Andersen’s (1995) classic study demonstrated that—in a variety of scientific discovery tasks in which participants explored the effects of several variables—even after 20 sessions spread over 10 weeks, fewer than 25% of 4th grader’s inferences were valid. Other studies of children’s understanding of evidence generation and interpretation (e.g., Amsel & Brock, 1996; Chen & Klahr, 1999; Bullock & Ziegler, 1996; Dean & Kuhn, 2007; Klahr, 2000; Klahr & Nigam, 2004; Schauble, Klopfer, & Raghavan, 1991, Strand-Cary & Klahr, 2008) reveal their fragile initial grasp of CVS, and the difficulty that they have in learning it.

Furthermore, in prior analyses, we found that students’ complete causal explanations of CVS (e.g., in which they explained that an unconfounded experiment was “good” because only the target variable could cause any differences in outcomes or explained that an experiment was not good because variables other than the target variable could also cause differences in outcomes, and so it’s not possible to know whether the target variable was causal) given during the “direct” instruction were significantly correlated with transfer performance. Thus, we were interested in whether the addition of more directive questions in TED, asking students to identify the potential causal factors in experiments, would lead to improved transfer performance. Increases in transfer rates support the hypothesis that understanding the determinacy/indeterminacy of outcomes is a key knowledge component for CVS transfer.

How does the TED tutor—even in its “non-intelligent” state—compare with an alternative lesson on CVS delivered by a live teacher in terms of CVS transfer rates, student enjoyment of the lesson, and of science more generally?

Does making a hypothesized “key” knowledge component more explicit via asking targeted questions lead to improved transfer performance? That is, does also asking students to identify the possible causal factors in a confounded experiment (i.e., the reason why it is necessary to control variables) promote far-transfer above telling students?

The second independent variable, manipulated within the two TED conditions, is the addition of causal questions.

Ramp posttest (near transfer) performance: Comparing TED-AQ students to TED-EO students, there was a significant ramps pretest by condition interaction (Figure 1 below), where there was a significant relationship between ramps pre and posttest only for students in the EO condition. Thus, the added question aided near transfer performance, especially for lowest-scoring students. 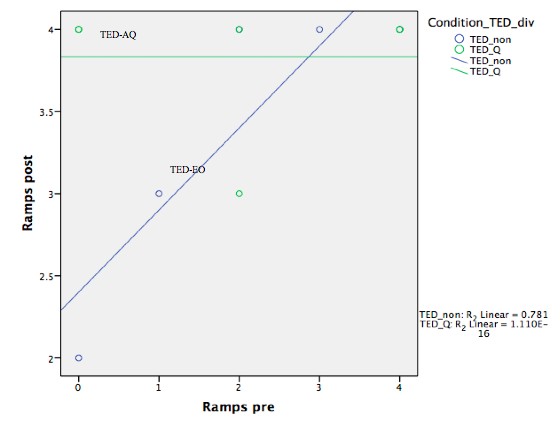 Table 2. Means (and standard deviations) by test type and time.

On the follow-up Story posttest, though students in the question condition tended to score higher than those in the explanation-only condition (Table 2), this difference just missed significance, F(1, 7) = 3.44, p = .11. Story pretest and reading level (where below basic = 0; basic = 1; proficient = 2; advanced = 3) were included in the ANCOVA. As in the immediate standardized posttest, there was no difference between conditions in performance on the follow-up standardized posttest, F(1, 7) = 0.02, p = .90.

However, the added-question students showed marginally higher Story test gains from the immediate to follow-up posttest, F(1, 10) = 4.55, p = .06 (ANCOVA, factoring out Story post; reading was not a significant source of variance, and was removed from the model, F(1, 11) = 5.17, p = .04, repeated measures ANOVA). Students who answered the additional questions gained significantly between the immediate and follow-up posttests, whereas the performance of students in the explanation-only condition did not differ from immediate to follow-up post. 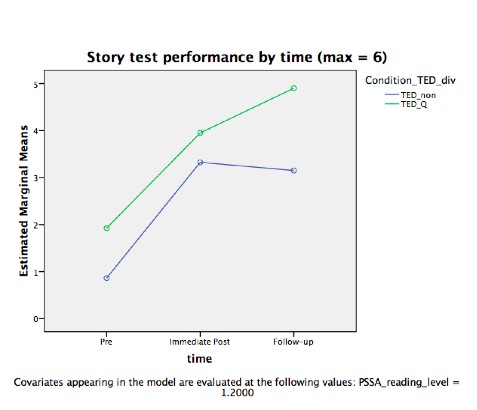 Next, we will discuss comparisons of TED to Control instruction. First, it is important to note that instruction in the Control condition took significantly longer (40 minutes) than in the TED conditions. Furthermore, students in the TED conditions took significantly less time than students in the Control conditions to complete the immediate Story posttest (6.88 and 9.85 minutes, respectively, p < .01).

On the Story follow-up paper-pencil test taken three weeks after instruction, though TED students tended to score higher than Control students (Table 4), this difference was no longer significant, F(1, 20) = 2.44, p = .13. Both Control and TED-AQ students (though not TED-EO students) gained significantly between the immediate and follow-up Story test. These gains may be due to teacher-reported intervening incidental in-class discussions of CVS in subsequent lessons on scientific method.

Finally, there was no difference between the Control and TED conditions in students’ reports of the effect of the lesson on how much they like science (Figure 3).

Figure 3. Frequency of responses to “How would you say doing this lesson made you feel about science (check one)?” 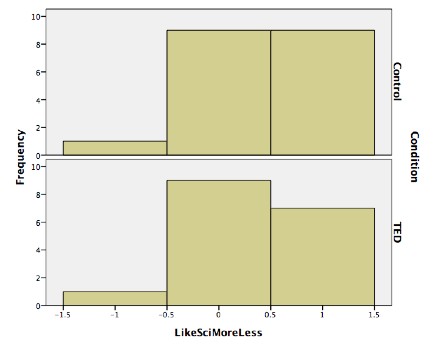 In summary, comparing the control group with the TED groups, students in the TED conditions performed significantly higher on the immediate far-transfer Story post-test, but there were no differences on the distant-transfer “standardized” immediate or follow-up posttests. Though students in the TED conditions continued to out-perform their Control counterparts on the follow-up Story posttest, this difference was no longer significant. It should be reiterated, however, that the students in the TED condition spent 40 minutes less in completing their lesson than the control condition, thus achieving greater or equal scores on the post-tests while having spent much less time covering the content. Thus, the TED-delivered instruction was more efficient than Control instruction. Furthermore, there were no differences in students’ report of the impact of the lesson on their liking science, though students in the Control condition performed experiments using expensive ramps apparatuses. Thus, TED instruction faired well against a solid comparison lesson on CVS.

Furthermore, within the TED condition, students given the additional questions requiring them to identify all potential causal variables showed higher near-transfer performance on the ramps posttest. Though they did not demonstrate better performance on the immediate Story posttest, they gained significantly more from the Story posttest to the Story follow-up test. These results support the hypothesis that understanding the determinacy or indeterminacy of experimental designs supports both initial learning of and transfer performance for CVS. However, these results should be replicated before drawing firm conclusions.

Klahr, D. (2009) “To every thing there is a season, and a time to every purpose under the heavens”: What about Direct Instruction? In S. Tobias and T. M. Duffy (Eds.) Constructivist Theory Applied to Instruction: Success or Failure? Taylor and Francis.

Klahr, D. & Li, J. (2005) Cognitive Research and Elementary Science Instruction: From the Laboratory, to the Classroom, and Back. Journal of Science Education and Technology, 4, 217-238.

Klahr, D., Triona, L. M., & Williams, C. (2007) Hands On What? The Relative Effectiveness of Physical vs. Virtual Materials in an Engineering Design Project by Middle School Children. Journal of Research in Science Teaching , 44, 183-203.

Triona, L. & Klahr, D. (2008) "Hands-on science: Does it matter what the student's hands are on in 'hands-on science? The Science Education Review.