Application of SimStudent for Error Analysis

Towards a theory of learning errors

The purpose of this project is to study how students fail to learn correct knowledge components when studying from examples and make (typical) errors by applying such incorrect knowledge components later when solving problems. We utilize a computational model of learning, called SimStudent that learns cognitive skills inductively from examples either by passively reviewing worked-out examples or by actively engaged in tutored problem-solving.

We are particularly interested in studying how the differences in prior knowledge affect the nature and rate of learning. We hypothesize that when students rely on shallow, domain general features (which we call "weak" features) as opposed to deep, more domain specific features ("strong" features), then students would more likely to make induction errors.

To test this hypothesis, we control SimStudent's prior knowledge to study how and when erroneous skills are learned by analyze learning outcomes (both the process of learning and the performance on the post-test).

A fundamental technology used for SimStudent is called Inductive Logic Programming (Muggleton, 1999) as an application for programming by demonstration (Cypher, 1993). Prior to learning, SimStudent is given a set of feature predicates and operators as prior knowledge.

Feature predicate is a Boolean function to test an existence of a certain feature. For example, isPolynomial("3x+1") returns true, but isConstantTerm("3x") returns false. An operators, on the other hand, is a more generic function to manipulate various form of objects involved in a target task. For example, addTerm("3x", "2x") returns "5x" and getCoefficient("-4y") returns "-4."

There are a number of models of student errors proposed so far (Brown & Burton, 1978; Langley & Ohlsson, 1984; Sleeman, Kelly, Martinak, Ward, & Moore, 1989; Weber, 1996; Young & O'Shea, 1981). Our effort builds on the past works by exploring how differences in prior knowledge affect the nature of the incorrect skills acquired and the errors derived. We are particularly interested in errors that are made by applying incorrect skills, and our computational model explains the processes of learning such incorrect skills as incorrect induction from examples.

We hypothesize that incorrect generalizations are more likely when students have weaker, more general prior knowledge for encoding incoming information. This knowledge is typically perceptually grounded and is in contrast to deeper or more abstract encoding knowledge. An example of such perceptually grounded prior knowledge is to recognize 3 in x/3 simply as a number instead of as a denominator. Such an interpretation might lead students to learn an inappropriate generalization such as "multiply both sides by a number in the left hand side of the equation" after observing x/3=5 gets x=15. If this generalization gets applied to an equation like 4x=2, the error of multiplying both sides by 4 is produced.

In general, a particular example can be modeled both with weak and strong operators. For example, suppose a step x/3=5 gets demonstrated to "multiply by 3." Such step can be explained by a strong operator getDenominator(x/3), which returns a denominator of a given fraction term and multiply that number to both sides. On the other hand, the same step can be explained by a weak operator getNumberStr(x/3), which returns the left-most number in a given expression. In this context, the operator getNumberStr() is considered to be weaker than the operator getDemonimator(), because a production rule with getNumberStr() explains broader errors. For example, imagine how we could model the error schema for "multiply by A." This error schema can be modeled with getNumberString() and multiply() – get a number and multiply both sides by that number. Without the weak operator, we need to have different (disjunctive) production rules to model the same error schema for different problem schemata – getNumerator() for A/v=C and getCoefficient() for Av=C.

Prior knowledge: implemented as "operator" and "feature predicates" for SimStudent.

Error prediction: For a qualitative assessment, we are particularly interested in errors made by applying learned rules as well as the accuracy of prediction. Given a step S performed by a human student at an intermediate state N, SimStudent is asked to compute a conflict set on N. Rule application Ri (i = 1, …, n) is coded as follows:

A simple fit to power law functions to the learning curves (converting success rate to log-odds) showed that the slope (or rate) of the Weak-PK learning curve (.78) is smaller (or slower) than that of the Strong-PK learning curve (.82). We then subtracted the two functions in their log-log form and verified in a linear regression analysis that the coefficient of the number of training problems (which predicts the difference in rate) is significantly greater than 0 (p < .05). 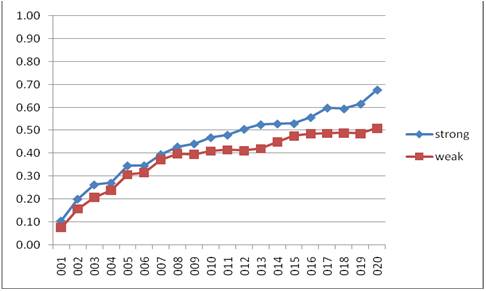 Figure 1: Average step score after each of the 20 training problems for SimStudents with either strong or weak prior knowledge.

Figure 2 shows a number of true negative predictions made on the test problems for each of the training iterations. 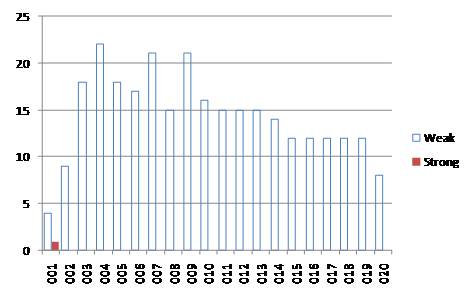 Figure 2: Number of True Negative predictions, which are the same errors made both by SimStudent and human students on the same step in the test problems.