Asking student to invent solutions to carefully designed challenges prior to receiving instruction can promote learning from subsequent instruction.

Students should attempt to rank alternatives in an invention task by comparing sets of contrasting cases, before receiving direct instruction and practice.

NASA is about to launch its latest weather satellite to space, with the goal of monitoring global warming. In order to put a satellite in orbit, it is being sent to space on a rocket. The rocket releases the satellite when it reaches it highest peak. NASA considers three rockets for this task: Fly-I, Orbitter, and Icarus. Each rocket was tested 4-5 times. At this point NASA wants to choose one rocket for further development.

While the amount of fuel may not be the right one (that is, perhaps more or less fuel was needed), it was identical in all trials. This means that at this point NASA does not care about the absolute height, since the amount of fuel will need to be adjusted. But NASA does care about the ability to predict what height the rocket will reach – that it, how consistent the rocket is. A consistent rocket arrives at the same height every time.

Which rocket would you recommend?

The following graphs show the height the rockets reached during testing, relative to the desired height: 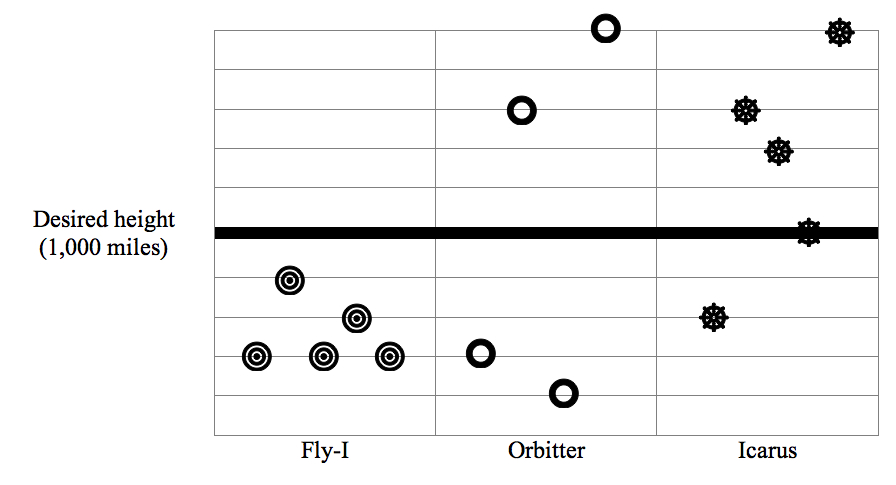 (These entries should link to one or more learning processes.)

It is being hypothesizes, though has not been tested empirically yet, that the set comparison tasks should use contrasting cases and not isomorphic cases.

work: An analysis of the failure of constructivist, Discovery, Problem-Based, Experiential, and Inquiry-Based Teaching. Educational Psychologist, 41(2), 75–86.