Difference between revisions of "Fostering fluency in second language learning"

Many studies have investigated the effect of exposure to language on fluency. It has been established, for instance, that fluency increases after a period of immersion or study abroad (Freed et al., 2004; Segalowitz & Freed, 2004). However, few types of instruction have been designed to increase oral fluency, and even fewer have been tested.

One such type of instruction is Nation’s 4/3/2 procedure, in which learners prepare a four-minute talk and repeat it twice to different partners, first in three minutes, then in two minutes (Nation, 1989). He found that the number of hesitations decreased in the retellings, and that sentences were more complex. We may characterize such an outcome as resulting from the fluency pressure exerted by the 4/3/2 procedure. It was not investigated, however, whether the effect transferred to new speeches, which is what we showed in Study 1. Another task that may increase fluency is shadowing, in which student talk along with a recording of a short speech by a native speaker. Shadowing may also increase the feature strength of formulaic sequences, resulting in faster access to them in subsequent production tasks.

This project is transformative in the sense that it moves research on fluency away from single- or multiple-case studies, using technology to collect and analyze larger amounts of oral production data (30 to 40 students per study), and to generate multiple measures of fluency, accuracy, and complexity. For example, not only articulation rate is measured, but also pause length, length of fluent run, and phonation/time ratio.

Study 1 investigated what characteristics of fluency are affected by the 4/3/2 procedure. Measures included the number of syllables per second (speech rate); mean length of fluent runs between pauses; phonation/time ratio; number of interphrasal and intraphrasal pauses; morphosyntactic accuracy; and number of embedded clauses (syntactic complexity). The posttest tested transfer to a different topic.

In Study 2 we investigated whether fluency is further enhanced by a pretraining of formulaic sequences, like the point is that, what I’m saying is that, and and so on). Fast and effortless access to these sequences frees up cognitive headroom which can then be used to construct sentences. This results in fewer and shorter pauses, and/or greater lexical and structural complexity.

Study 3 investigated whether shadowing leads to increased use of formulaic sequences (chunking) and native-like pauses in subsequent production tasks.

In studies 4 and 5 are investigating in further detail how the characteristics of the 4/3/2 task lead to fluency development. In Study 4a, we investigated how time pressure affects the benefits of repetition in terms of fluency, accuracy and complexity. We examined recordings both from the 4/3/2 task itself, and from long-term retention tests. In addition, we investigated the role of specific knowledge components in fluency development.

In Study 4b we tracked how the control and retrieval of specific vocabulary items and morphosyntactic structures develop as a result of the 4/3/2 training. Next, in Study 5, we examined whether priming these same items leads to greater accuracy and fluency during training and later. Data collection for Studies 4a, 4b and 5 took place in the Spring and Fall 2008 semesters, in the English as a Second Language (ESL) learnlab (level 4, higher intermediate). Data analysis is currently in progress.

4/3/2 procedure
A teaching method in which students talk about a topic for four minutes. Then they repeat their speech in three minutes, and again in two minutes.
Shadowing
Repeating speech while it is being spoken.
Formulaic sequence
A sequence, continuous or discontinuous, of words or other elements, which is, or appears to be, prefabricated (see Wray, 2002, p. 9), e.g., The point is that, What I'm trying to say is that, and Take something like.
Articulation rate
Number of syllables per second
Phonation/time ratio
The percentage of time spent speaking as a percentage proportion to the time taken to produce the speech sample
Morphosyntactic accuracy
In this study we will investigate subject-verb agreement, tense errors, definite/indefinite articles
Syntactic complexity
In this study we will investigate the number of embedded finite and non-finite clauses

For studies 2 and 3, questionnaire data were collected about the students' contact with the second language (English) and their first language, in terms of types of contact (e.g., listening to the radio, talking to friends, talking to strangers) and amount of contact (number of days per week, number of hours per day). We will explore whether these individual differences affect pretest performance and fluency development.

Many studies in the field of second language acquisition that have studied fluency have investigated the effect of study abroad, immersion and regular classroom practice on fluency (Freed, Segalowitz, and Dewey, 2004; Segalowitz & Freed, 2004). Very few studies, however, have investigated specific activities that lead to fluency, which can be done in classrooms. Two such activities are tested in this project.

The first activity that is tested is the 4/3/2 procedure as proposed by Nation (1989). He investigated the development of fluency during this task, but used a limited number of measures and did not test the long-term effect: he only analyzed fluency during the task itself, not during the following weeks. This project will test the long-term effect and will include more measures, such as length and location of pauses. An attempt will be made to link these measures to cognitive mechanisms.

A general effect of the 4/3/2 task on fluency development was found in Study 1. The effect was investigated in more detail in Study 4a, focusing on the two main characteristics of the task: repetition and increasing time pressure.

The contribution of knowledge components is tested in Studies 2, 4b and 5. In Study 2, students received a pretraining of a set of formulaic sequences before the first 4/3/2 fluency training session. In Study 5 students received a pretraining at the start of each 4/3/2 fluency training session. The knowledge components in this pretraining was selected based on the results of Study 4b, which investigated the role of vocabulary breadth, vocabulary depth and grammatical knowledge in oral fluency.

(For screenshots exemplifying some of the independent variables, see Screenshots below.)

Data collection for Study 1 was completed in November, 2006. Data for Studies 2 and 3 were collected in the Spring semester of 2007.

Results of Study 1 show that, during each training session, the mean length of fluent runs increased mostly for the two conditions in which speeches were repeated (Repetition and Control/Repetition). In addition, for all three groups, pauses, on average, became shorter, and phonation/time ratio increased (i.e., students were able to fill more time with speech).

Figures 1, 2 and 3 show the mean length of fluent runs for each recording in each of the sessions. It is clear that in sessions 1 and 2 the two conditions in which speeches were repeated pattern more closely together than the condition in which speeches were not repeated. The improvement in performance of the two repetition conditions seems more stable, whereas the performance of the No Repetition condition seems to be influenced by the topic of a particular speech. 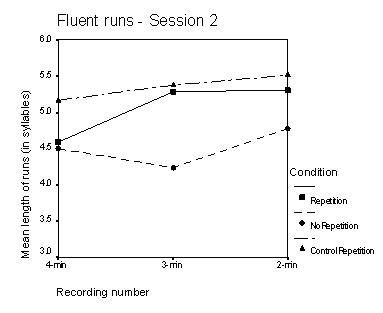 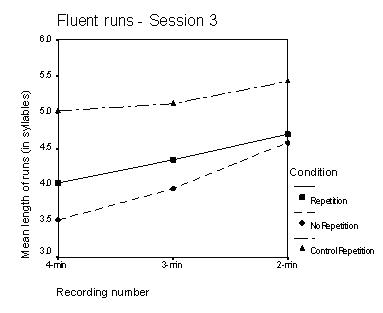 Both groups reach a higher articulation rate, measured in syllables per minutes, on the delayed posttest. This may have been due to their continued Speaking classes in the English Language Institute, and may not have been related to this study.

It should be noted that the posttests were administered one and four weeks after the last session of the fluency training, and involved a new topic, which the students had not talked about during the 4/3/2 training.

The results of Study 1 suggest that knowledge becomes more easily accessible in subsequent speeches, since phonation/time ratio increases while pauses on average become shorter and the length of fluent runs is at least stable. In the two conditions in which speeches are repeated, the length of fluent runs increases, indicating an advantage over the no-repetition condition, in which this length is stable. It seems, therefore, that repeating a speech about a particular topic enables students to produce longer fluent runs. The overall advantage of these two conditions over the no-repetition condition parallels patterns in the pre- and posttest data.

Overall, it seems that the performance of the no-repetition condition was more variable across speeches. This may be due to an effect of topic, which may be more or less familiar, complex, or linguistically difficult (e.g., eliciting present vs. past tense).

This project is part of the Refinement and Fluency cluster. The studies in this cluster concern the design and organization of instructional activities to facilitate the acquisition, refinement, and fluent control of critical knowledge components. The general hypothesis is that the structure of instructional activities affects learning. This project addresses the core issues of task analysis, fluency from basics, in vivo evaluation, and scheduling of practice. The 4/3/2 task has been analysed into its components. In Study 1, the effect of the component of repetition is investigated. Practice with the basic skills of using vocabulary and grammar is expected to increase fluency. This will be the case in the Repetition condition, where students have the opportunity to re-use the words, formulaic sequences and grammar in subsequent recordings. In Study 2, students are encouraged to use formulaic sequences that have been taught before training. In Study 3 it is investigated whether shadowing promotes the use of formulaic sequences in spontaneous speech. All three studies take place in an in vivo setting.

For a summer intern project in June and July 2007, Kara Schultz did a multiple case study of six students from Study 1. The project was a first step towards more in-depth analyses of the data of all three studies in the ESL fluency project, addressing the following research questions:

In September 2007 the PSLC executive committee approved our new project plan, in which we proposed follow-up studies that investigate the effect of time pressure and the role of specific knowledge components (vocabulary, grammar) in oral fluency. These studies will be run in the Spring and Fall semesters of 2008.

De Jong, N., Presentation of the software component at the Multimedia Showcase sponsored by the Robert Henderson Media Center at the University of Pittsburgh, September 2006 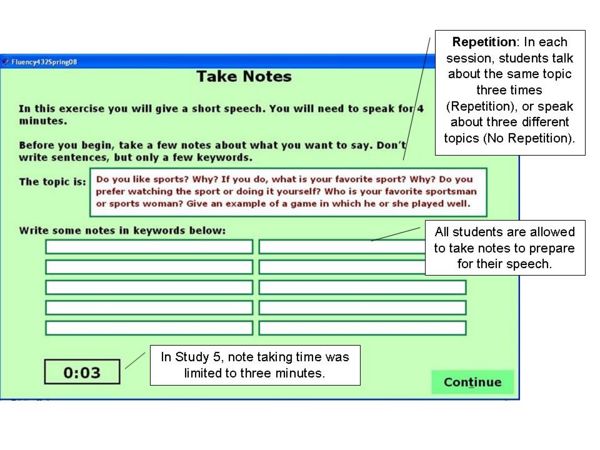 Screenshot of the screen where students take notes before they start speaking. 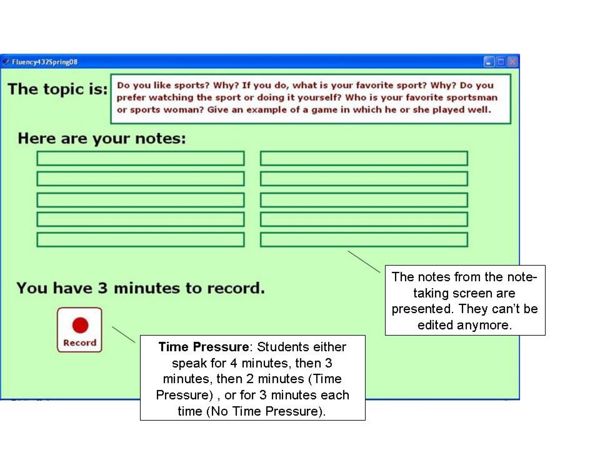 Screenshot of the screen where students record their speeches 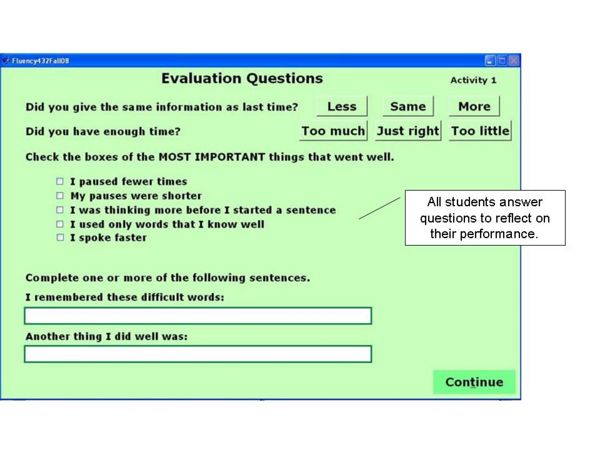 Screenshot of some of the questions after each speech has been recorded.