Learning with Diagrams in Geometry: Strategic Support for Robust Learning

We are using the Geometry Cognitive Tutor as a research vehicle for our project. In geometry, visual information is represented in a problem diagram and verbal/symbolic information is represented in text that contains given and goal information as well as in conceptual rules/principles of geometry. The goals of this research are to investigate how coordination between and integration of visual and verbal information influence robust learning processes, as measured by knowledge retention and transfer. By coordination, we mean the processes that support mapping between relevant visual and verbal information as well as the processes that keep relevant knowledge components active. For example, in geometry a student needs to map between text references to angles and their location in a diagram and will need to maintain the numerical (given or solved) value of that angle to use in problem solving. By integration, we mean knowledge construction events that involve both visual and verbal knowledge components. For example, in geometry a student may need to construct an understanding of linear angles that includes both a verbal definition (e.g., “two adjacent angles that form a line”) and a visual situation description (e.g., a visual representation of the two angles formed by intersection of a line).

Thus, the other two factors (elaborated explanations and integrated hints) are hypothesized to support processes of integration for visual and verbal knowledge components. Further, we hypothesize this integration as critical robust learning with multimedia sources.

By elaborated explanations we mean justifications given by the student of their problem-solving steps in which they elaborate not only which problem-solving principle is being applied (as investigated in much previous research on self-explanation with interactive learning environments) but also how it applies. A rich body of prior research has demonstrated that students develop deeper understanding of instructional materials when they self-explain to themselves during learning (e.g., Bielaczyc, Pirolli, & Brown, 1995; Chi, Bassok, Lewis, Reimann, & Glaser, 1989; Chi, de Leeuw, Chiu, & LaVancher, 1994). An existing version of the Geometry Cognitive Tutor implements student self-explanations of their problem solving using a very simple process: after correctly answering a geometry problem step, students must select the geometry rule or theorem that justifies their answer from a glossary menu of terms. Despite the limitations of the menu-based explanations, they have been shown to promote student learning in the Geometry Cognitive Tutor (Aleven & Koedinger, 2002). Thus, our question is whether more explicit forms of communication that link verbal and visual knowledge components can be more successful at promoting robust learning. We argue that scaffolds that promote sense making using both visual and verbal knowledge may be of greater benefit to students than scaffolds that require student explanations using only verbal declarative knowledge.

By integrated hints we mean instructional hint sequences that use visual means to highlight relations between visual information in the problem diagram and verbal information in the hint message. Previous research has shown that integrated representations can be useful for learning (e.g., Sweller & Chandler, 1994). Integrated hints may support robust learning better than verbal hints alone because they both the effort required for visual-verbal mapping, and they may support active integration of knowledge. 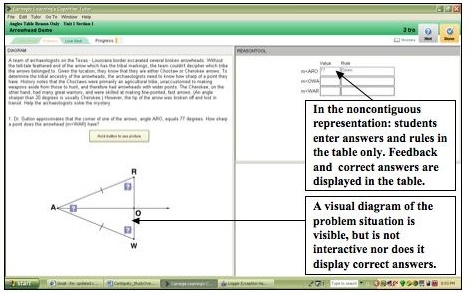 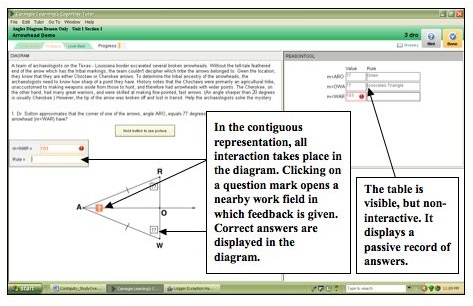 2. Type of Explanation
Verbal explanations (students state geometry principles only) vs. Elaborated Explanations (students state geometry principles and their application to the diagram)
3. Type of Hints
Verbal hints (hints provided as text only) vs. Integrated Hints (hints provided as text embedded in and applied to a diagram)

Current findings suggest that interaction with visual representations during problem-solving supports deep transfer during learning. However, problem-solving performance is also supported by integrated self-explanations where students justify their problem solving steps with both verbal reasons (geometry rules) and visual information (diagram features relevant to the named geometry rule). Thus, integration may be supported by materials or explanations that support processing of visual and verbal information during learning.

Figure 3. Mean performance on explanations for unsolvable problems by experimental condition, at pre- and posttest. 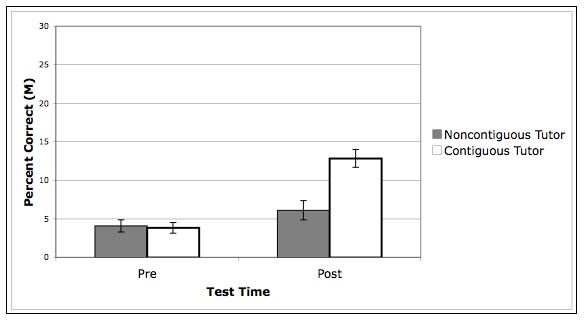 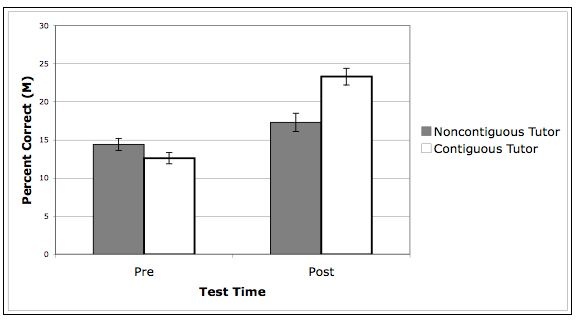 Data analysis is currently underway for a completed in-vivo study that tested elaborated explanations in addition to the effect of contiguity. In-vivo study of integrated hint sequences is planned for Spring 2007. We have evidence from the (paper-based) difficulty factors analysis that elaborated explanations support problem solving performance. We hypothesize that integrated hints also will support robust learning. Both of these manipulations, elaborated explanations and integrated hints, support coordination through self-explanation of visual and verbal information. Providing these multiple representations during learning likely affects path choice. For example, when students are required to explain the application of geometry principles using diagrams, there will be only small differences in estimated effort of shallow and deep strategies since shallow strategies are unlikely to achieve the correct answer. Further, we anticipate that elaborated explanations and integrated hints also produce path effects: the processes that students employ via path choice are more effective when the materials support use of visual and verbal information during sense making. Specifically, scaffolds or materials that support sense making with visual and verbal information should promote integration.