Difference between revisions of "Stoichiometry Study"

We have been investigating whether personalized (or polite) instructional materials and worked examples can improve learning when used as techniques complementary to an intelligent tutoring system. The study involves online (i.e., web-based) learning of stoichiometry, the basic math required to solve elementary chemistry problems, and uses intelligent tutoring systems developed with the aid of the Cognitive Tutor Authoring Tools (CTAT), a key enabling technology of the PSLC. A screen shot of the tutor we have been using in the studies is shown below. The stoichiometry materials were piloted at CMU and the University of Pittsburgh and have now been used in three separate in vivo studies with students at a university and three high schools.

In a recent book by Clark and Mayer (2003), a number of E-Learning Principles were proposed as guidelines for building e-Learning systems. All are supported by multiple educational psychology and cognitive science studies. We were especially interested in and decided to experiment with two of the Clark and Mayer principles:

In contrast with most previous studies, however, we wished to test these principles in the context of an intelligent tutoring system (ITS), rather than on their own in a standard e-Learning or ITS environment or, as in even earlier studies, in conjunction with problems solved by hand. The key difference is that an intelligent tutoring system provides more than just problem solving practice; it also supplies students with context-specific hints and feedback on their progress.

Can personalized (or polite) hints, feedback, and messages lead to robust learning when used in conjunction with a highly supportive learning environment, in particular an intelligent tutoring system?

Can worked examples lead to robust learning when used in conjunction with a highly supportive learning environment, in particular an intelligent tutoring system?

The Clark and Mayer personalization principle proposes that informal speech or text (i.e., conversational style) is more supportive of learning than formal speech or text in an e-Learning environment. In other words, instructions, hints, and feedback should employ first or second-person language (e.g., “You might want to try this”) and should be presented informally (e.g., “Hello there, welcome to the Stoichiometry Tutor! …”) rather than in a more formal tone (e.g., “Problems such as these are solved in the following manner”).

Although the personalization principle runs counter to the intuition that information should be “efficiently delivered” and provided in a business-like manner to a learner, it is consistent with cognitive theories of learning. For instance, educational research has demonstrated that people put forth a greater effort to understand information when they feel they are in a dialogue (Beck, McKeown, Sandora, Kucan, and Worthy, 1996). While consumers of e-Learning content certainly know they are interacting with a computer, and not a human, personalized language helps to create a “dialogue” effect with the computer. E-Learning research in support of the personalization principle is somewhat limited but at least one project has shown positive effects (Moreno and Mayer, 2000). Students who learned from personalized text in a botany e-Learning system performed better on subsequent transfer tasks than students who learned from more formal text in five out of five studies. Note that this project did not explore the use of personalization in a web-based intelligent tutoring setting, as we are doing in our work.

The Clark and Mayer worked example principle proposes that an e-Learning course should present learners with some step-by-step solutions to problems (i.e., worked examples) rather than having them try to solve all problems on their own. Interestingly, this principle also runs counter to many people’s intuition and even to research that stresses the importance of “learning by doing” (Kolb, 1984).

Previous ITS research has investigated how worked examples can be used to help students as they problem solve (Gott, Lesgold, and Kane, 1996; Aleven and Ashley, 1997). Conati’s and VanLehn’s SE-Coach demonstrated that an ITS can help students self-explain worked examples (2000). However, none of this prior work explicitly studied how worked examples, presented separately from supported problem solving as complementary learning devices, might provide added value to learning with an ITS and avoid cognitive load (Sweller, 1994). Closest to our approach is that of Mathan and Koedinger (2002). They experimented with two different versions of an Excel ITS, one that employed an expert model and one that used an intelligent novice model, complemented by two different types of worked examples, “active” example walkthroughs (examples in which students complete some of the work) and “passive” examples (examples that are just watched). The “active” example walkthroughs led to better learning but only for the students who used the expert model ITS. However, a follow-up study did not replicate these results (Mathan, 2003). This work, as with the other ITS research mentioned above, was not done in the context of a web-based ITS.

To test our hypotheses and the effect of personalization (or politeness, as discussed below in the "Findings" section) and worked examples on learning, we designed and have executed several 2 x 2 factorial studies.

The 2 x 2 factorial design for our third and most recent study is shown below.

To evaluate learning, students are asked to solve pre and post-test stoichiometry problems that are isomorphic to one another and to the tutored problems. Thus, we have focused on normal post-tests.

H1
The use of polite, conversational problem statements, feedback, and hints in a supported problem-solving environment (i.e., an intelligent tutoring system) can improve learning in an e-Learning system.

H2
The use of Worked Examples in a supported problem-solving environment (i.e., an intelligent tutoring system) can improve learning in an e-Learning system.

In two initial 2 x 2 factorial studies, we found that personalized language and worked examples had no significant effects on learning. On the other hand, there was a significant difference between the pre and posttest in all conditions, suggesting that the intelligent tutor present in all conditions did make a difference in learning. For study 1 we had N = 63 and for study 2 we had N = 76. The full results are reported in (McLaren, Lim, Gagnon, Yaron, and Koedinger, 2006).

With respect to personalized language, we thought that perhaps our conceptualization and implementation was not as socially engaging as we had hoped. This was also suggested to us by Rich Mayer, who reviewed the study. In a recent study that Mayer and colleagues did (Wang, Johnson, Mayer, Rizzo, Shaw, & Collins, in press), based on the work of Brown and Levinson (1987), they found that a polite version of a tutor, which provided polite feedback such as, “You could press the ENTER key”, led to significantly better learning than a direct version of the tutor that used more imperative feedback such as, “Press the ENTER key.” We decided to investigate this in a third in vivo study in which we changed all of the personalized feedback and hints of the tutor to more polite forms, similar to that used by Mayer and colleagues. Below is a table that provides examples of the differences in feedback between the polite version of our tutor and earlier versions. 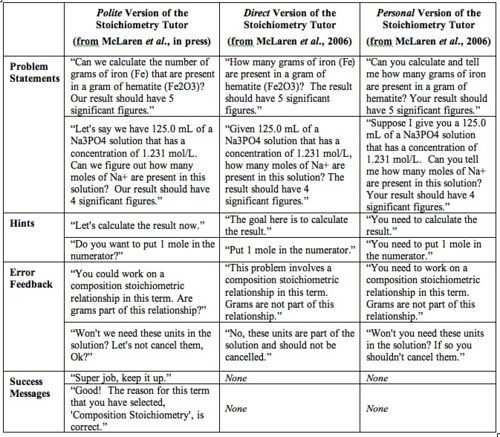 We recently concluded this third study. We have so far only analyzed the first 33 subjects, out of a total of approximately 110 (for details on the analysis of the first 33 subjects see McLaren, Lim, Yaron, & Yaron, in press). The preliminary data indicates that the polite condition leads to larger learning gains than the non-polite condition, however, not at a statistically significant level. Worked examples also did not make a difference to learning. We are in the process of analyzing the rest of the data from the remaining subjects who participated in this study.