Previous research shows that video viewing (a frequent activity in language courses) is more effective when students receive guidance. We investigate how to support students in an on-line environment in acquiring cultural knowledge and intercultural competence by viewing clips from feature films from the target culture. We test the effectiveness of a set of attention-focusing techniques (pause-predict-ponder), some of which have been shown to be effective in other contexts, with ICCAT, a simple tutor that enhances an existing classroom model for the development of intercultural competence. In order to evaluate this instructional method, an in vivo experiment was conducted in the French LearnLab course. Students were randomly assigned to conditions in which we compared ICCAT versions with and without attention-focusing techniques. We found that the addition of the pause-predict-ponder seemed to assist students in acquiring cultural knowledge components and significantly increased students’ ability to reason from an intercultural perspective.

Level 1: no cultural reference I always thought the French were welcoming until watching these clips. Level 2: unspecific cultural explanation From this video, I saw that Arabs were stereotyped and generalized. I've never heard of this before in French culture, but I probably could have guessed it because I know that Anti-semitism has been on the rise in France for several years now. Level 3: specific and elaborated cultural explanation We have similar confused stereotypes about middle Eastern/South Asian owners of convenience stores. We don't neccessarily consider them Muslim. Usually in my understanding of immigration, immigrants are victims of negative stereotypes because of economic insecurity. Realistic competition for scarce resources seems to bring out the worst in people. I wonder what type of stereotypes there are against immigrants in non-European countries, and I wonder if they exist for the same reasons.

How can we support students in ill-defined domains such as cultural learning?

How is robust learning of cultural competence from narrative excerpts affected by focusing attention on appropriate features?

Multimedia technologies are used with increasing frequency in language-learning classes, to support many aspects of language learning. In regular classroom courses, the viewing of a film or video from or about the target culture is typically followed by an instructor-led classroom discussion. In the context of an online course, however, the use of video presentations creates a practical problem. While video content can now be easily distributed over the internet, video viewing in a language class without guidance from an instructor can result in shallow or little learning. There is a need therefore to provide students with guidance to help them focus on salient features of the video. We explore this issue as it relates to students’ on-line learning of “intercultural competence,” now an integral part of many modern language curricula. Students are expected not just to learn to communicate in the given language, but also to acquire an ability to “gain insight on native perspectives, opinions, and values; reflect critically and engage with otherness”. In an attempt to include these higher-order skills in language classrooms, the content standards of American Council on the Teaching of Foreign Languages (ACTFL) emphasize cultural understanding. For example, Standard 3.2 recommends that “Students acquire information and recognize the distinctive viewpoints that are only available through the foreign language and its cultures.” Practicing these skills differs from simply knowing a few typical facts about a culture (e.g., that the French standard criteria for completing high school is the baccalaréat exam) in that students must be able to search for cultural explanations and take into account multiple points of view. To achieve these learning objectives, a typical task might be to watch a film from the target culture in class with guided questions and support from the teacher, followed by a class discussion. But in an on-line course, what kind of guidance from a system will be effective in this regard? Previous work on language learning provides indirect support for the use of these kinds of attention-focusing techniques. Focusing students’ attention (e.g. by underlining or highlighting) on key components of language materials has been shown to help students acquire new knowledge by noticing inconsistencies with their current knowledge in domains like vocabulary or grammar. More generally, found evidence that in order to correctly recall information, attention must be focused on appropriate features of multimedia, e.g. by revealing important information for emphasis. While a variety of techniques have been hypothesized to support attention, successful techniques are usually explicit and often used in combinations, as in the current work. Prediction, a key attention-focusing technique in our work, has been used successfully in domains other than language learning. For example, it is one of the four components of reciprocal teaching, a program that supports students in learning to comprehend text. It has also been used successfully to help students learn from viewing animations of computer algorithms. To the best of our knowledge, it has not been studied in the context of instruction on cultural knowledge and intercultural competence. In these previous studies, students either did not receive feedback on their predictions, or received only informal feedback from peers (as in the reciprocal teaching studies). In an online learning environment, where students (inevitably) work individually at least part of the time, it may be important to have students reflect on whether their predictions are correct and on the explanations for their predictions. A simple tutoring system could help in this regard: explicit feedback on predictions and answers to the deep questions may help students ‘notice the gap’ between their current knowledge and the desired knowledge and increase learning.

Figure 1: Control condition with space for taking notes on the video 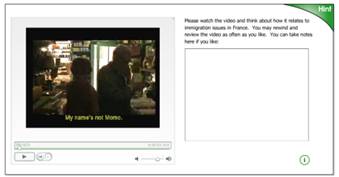 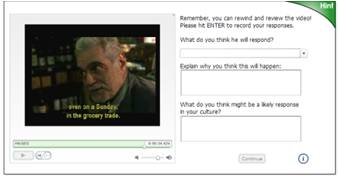 Knowledge components in the domain might be divided into three types. Implicit KCs that are incorrect might take the form of cultural stereotypes, or the production that “If there is a difference from my culture, the behavior/value is wrong”. A correct implicit KC might be a cultural value or behavior that comes from an experiential understanding of the culture, or could be expressed as a production such as “If there is a difference from my culture, then explore whether or why it might be related to culture”. Explicit KCs can be verbalized as behavior-related components such as “In the French school system the baccalauréat exam provides strict criteria for success” or value-related components such as “In French society, social hierarchy is highly valued”. Cultural elements in each film were decomposed into a hierarchy that covered the main knowledge components in the theme. Each component was then formed into a question requiring cultural analysis that was situated within the context of the film.

The analytical post-test questions that comprised the first main type of assessment were developed from a knowledge component analysis of the cultural elements in the film clips.

Students were evaluated on their contributions to a cultural discussion board using a validated scale developed by Steglitz that measures cultural perspective-taking skills.

Students who had attention-focusing techniques achieved higher levels of perspective-taking in a discussion forum as well as performed better with marginal significance on critical analysis of culture measures.

While students in the control condition scored an average of only 62%, students in the experimental condition scored an average of 72%. This difference was marginally significant on an ANOVA test (F (1, 34) = 3.68, p < .064, SDs = .12, .16). However, using the F statistic to calculate Cohen’s d, a measurement of the relative size of the observed effect, shows that the treatment had an overall effect size of .67 (a medium size effect).

In our second type of assessment, the “intercultural competence” measure, each post on the discussion boards was given a score according to the categories developed by Steglitz, and then an average score was calculated for each student across all of their posts. An ANOVA shows the experimental group scored a significantly higher average of 1.61 out of 3, compared to the control mean score of 1.36 (F (1, 34) = 3.9, p < .05, SDs = .42, .40).

Ogan, A., Aleven, V., Jones, C. (In Press) Culture in the Classroom: Challenges for Assessment in Ill-Defined Domains. To appear in the Workshop Proceedings on Ill-Defined Domains at the 8th International Conference on Intelligent Tutoring Systems, 2006.