Difference between revisions of "Analogical Scaffolding in Collaborative Learning"

Past research has shown that collaboration can enhance learning in certain conditions. However, not much work has explored the cognitive mechanisms that underlie such learning. Chi, Hausmann and Roy (2004) propose three mechanisms including: self-explaining, other-directed explaining, and co-construction. In the current study, we will examine the use of these mechanisms when participants learn from worked examples across different collaborative contexts. We compare the effects of adding prompts that encourage analogical comparison to prompts that focus on single examples (non-comparison) to a traditional instruction condition, as students learn to solve Physics problems in the domain of rotational kinematics. Students learning processes will be analyzed by examining their verbal protocols. Learning will be assessed via robust measures such as long-term retention and transfer.

Schema Acquisition and Analogical Comparison: A problem schema is a knowledge organization of the information associated with a particular problem category. Problem schemas typically include declarative knowledge of principles, concepts, and formulae, as well as the procedural knowledge for how to apply that knowledge to solve a problem. One way in which schemas can be acquired is through analogical comparison (Gick & Holyoak, 1983). Analogical comparison operates through aligning and mapping two example problem representations to one another and then extracting their commonalities (Gentner, 1983; Gick & Holyoak, 1983; Hummel & Holyoak, 2003). Research on analogy and schema learning has shown that the acquisition of schematic knowledge promotes flexible transfer to novel problems. For example, Gick and Holyoak (1983) found that transfer of a solution procedure was greater when participants’ schemas contained more relevant structural features. Analogical comparison has also been shown to improve learning even when both examples are not initially well understood (Kurtz, Miao, & Gentner, 2001; Gentner Lowenstein, & Thompson, 2003). By comparing the commonalities between two examples, students could focus on the causal structure and improve their learning about the concept. Kurtz et al. (2001) showed that students who were learning about the concept of heat transfer learned more when comparing examples than when studying each example separately. In an ongoing project in the Physics LearnLab by Nokes & VanLehn, (2008) students learned to solve problems on rotational kinematics in one of the three conditions: read worked examples, self-explain worked examples, and engage in analogical comparison of worked examples. Preliminary results showed that the groups that self-explained and engaged in analogical comparison outperformed the read-only control on the far transfer tests. Our current project builds upon these results by applying them in a collaborative setting. In summary, prior work has shown that analogical comparison can facilitate schema abstraction and transfer of that knowledge to new problems. However, this work has not examined whether analogical scaffolding can lead to effective collaboration. The current work examines how analogical comparison may help students collaborate effectively.

The only independent variable was Experimental Condition. There were three conditions: Compare, Non-compare, and Problem-solving.

The following hypotheses are tested in the experiment:

2. Students learning gains will differ by the kinds of learning processes they engaged in. Specifically, students engaging in self-explaining, other-directed explaining, and co-construction will show differential learning gains. This is an exploratory hypothesis and will be tested by undertaking a fine-grained analysis of verbal protocols generated by students as they solve problems collaboratively. 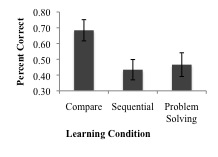 During learning, students in all three conditions studied worked examples and solved isomorphic problems. The answers to compare questions and sequential questions were scored for students in those conditions. Students were given one point for every correct concept they mentioned while answering the analogical comparison questions in the compare condition or questions directed at studying individual examples in the sequential condition.

The sequential group answered a significantly higher percentage of questions (M = 70.28%, SE = 5%) correctly over the compare group (M = 50.66%, SE = 6%); F (1,22)= 5.60, p < 0.05. Next, we looked at the isomorphic problems students solved during learning. On the first isomorphic problem, the three conditions were not significantly different; F (2,33) = 0.88, ns. On the second isomorphic problem, the three conditions were marginally different; F (2,33) = 2.60, p < 0.1 and the effect was in a direction favoring the sequential group over the compare and the problem solving groups. High variation was observed in performance on the learning tasks, suggesting the possibility that individual differences would interact with learning outcomes. We are interested in testing the effectiveness of our intervention on test performance for when testing was successful. Therefore, we selected the best learners from each group by conducting a median split based on the learning scores (i.e., average scores on isomorphic problems from the learning phase). This was based on the assumption that there are some qualitative differences between learners who show high learning and those who show low learning during the learning intervention. This left us with six pairs in each group (high / low split for each condition).