In machine learning research, it has been found that multiple-strategies and multiple modalities facilitate learning (Blum and Mitchell, 1998). However, the effectiveness of the properties of “co-training” theory have not been tested in human learners yet. We carried out this study as a follow-up study to understand the pairs effect. We have to know whether it is restricted to or larger for unlabeled trials.

Pairing of visual font and auditory sound of Chinese characters should enhance learning more than the unpaired condition, but the benefit is more obvious when the trials are unlabeled. 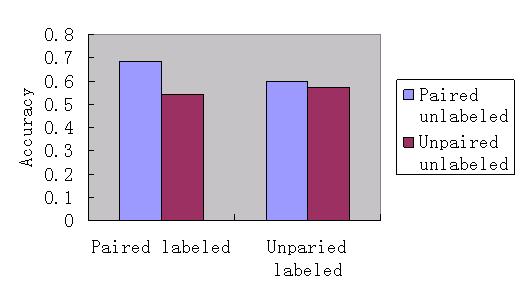 Even though the pairing effect was not statistical significant, the effect showed the pattern as the hypothesis predicted. Pairing of visual and auditory modality is more helpful than any single modality because the visual-auditory connection can be build during the learning process. However, when a label (English translation) is provided, modality pairing does not lead to any benefit because there has already been visual-lexical and auditory-lexical connections for a human learner to process. It might be better for a human learner to focus on one connection at a time due to the working memory load.